Back to Press Room

Transforming half of the library into a ‘fluid space’ helped an elementary school foster a culture of inclusivity and creativity.

About five years ago, my school, Mountain View Elementary in Simi Valley, CA, was on the verge of closing down due to declining enrollment. I had just taken over as principal after a career spent not in administration but in school psychology and supporting programs for special needs students. But already I could see things were changing. In an effort to boost enrollment, our district designated us a Model Technology School and, during a four-year rollout, installed new tech, including an interactive whiteboard in every classroom. In 2015, the rollout ended for us. We knew we needed to expand upon the vision and add something to be an even bigger draw.

In some ways, our elementary school looks like any other, but in others it’s very different. Our school serves students with diverse backgrounds and learning needs in typical classrooms, and we also have programs geared toward students with autism, emotional disturbances, and hearing impairments. Finding ways to engage every student and create a culture of inclusivity is very high on our list of priorities. When we were retooling our vision, we hit on the theme of, “A Bright Future Starts with an IDEA” where IDEA stands for Interactive Technology, Digital Discovery, Exploration, and Awareness (or inclusivity, if you like). We asked teachers to consider these themes, but we were also on the hunt for a way to show them off schoolwide.

From Library to Makerspace

Then, in late 2015, I took a trip with two of my teachers to a regional ed tech conference, and sent my librarian, Robin, to a special workshop centered all around makerspaces, which were an exciting new topic of conversation. As luck would have it, a keynoter at my conference also spoke about the maker movement. When we compared notes, we realized it was all coming together at the right time. All of us returned invigorated and ready to roll up our sleeves and work. 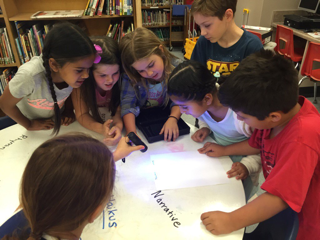 As with any change, you start with a group of people who envision what this could one day become, and who are running on their passion alone. Since I’m an administrator, I felt like my job was hand over the reins to the librarian and teachers who had all the ideas about what this would look like in practice. When they suggested devoting half our library to the makerspace I didn’t bat an eye. When they cleared out a work room and turned it into a green screen animation center, I told them to go for it. To me, the biggest thing was to let go of that control. The way I look at it, if I limit students to only what I know personally, I’ve limited the entire campus. If you take the collective knowledge of your staff and their passions and follow through on them, the kids will get so much more out of it.

At first, we didn’t have a lot of stuff to fill out our makerspace, so we added comfortable seating and made it a place where kids would want to spend time. We never planned out every piece of equipment and technology beforehand, both because technology is always changing (along with teacher wish lists) and also because we didn’t design the makerspace around things that might not stick around long anyway. Instead, we designed it around the idea that this would become a place where kids’ work and play would look the same. In a school where students have so many different learning preferences, strengths, and weaknesses, a makerspace lends itself beautifully to shared learning, exploration, novel engineering, and working with multiple modalities. That’s something we knew all our students could enjoy.

Slowly, though, we did begin adding things: tinker tables, sewing machines, coding toys, tablets, computers with animation software, and more. A lot of makerspace items are very inexpensive. In the end, we spent some money, but we also sent home a “wish list” to parents asking for donations. Mountain View has a large percentage of students on free and reduced lunch, and we rarely get big parent donations to our PTA. But in this, they came through in ways I never hoped, crowding our tables with fabrics, craft supplies, and Legos.

I also approached vendors and offered to pilot new products whenever I could. To make sure all our students were getting the most out of the experience, I had the idea to add a central speaker system to the room. Many of the deaf and hard-of-hearing students carried around personal amplification systems previously, but we wanted something that every student and teacher could be a part of. We added a microphone and ceiling-mounted Topcat amplification system from Lightspeed Technologies to every classroom and to the makerspace. The systems ensure that all students can hear teacher and librarian instruction over the noise inherent in a collaborative classroom or workspace. Students also used the systems to present their work, and we quickly learned how much more confident students (and teachers) are when they don’t have to shout.

Making the Most of the Space

Before we created our makerspace, students had regularly scheduled library time with their classes. Now, we’ve split that time in half, giving students some time in the library as well as the makerspace. We also open it up during lunchtime and recess for free exploration. When teachers assign open-ended projects, students often come into the makerspace and start creating. 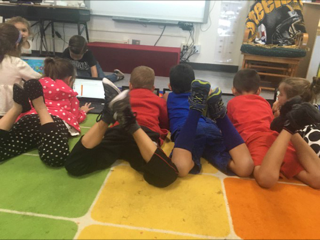 Recently, a group of students created a video about a social studies lesson on the Gold Rush using stop-motion animation and our green screen by arranging special makerspace time during school. Teachers also spend time in the makerspace, checking out things they want to use in their classroom. A fourth-grade class is working in small groups to builds model schools on Mars. Right now, they’re researching, but pretty soon they’ll be using makerspace materials to create commercials and brochures. In that way, it’s become a fluid space that’s both a part of and separate from the classroom.

Going forward, I still very much follow my teachers’ leads. They go to conferences and check out the maker chats on Twitter, and whatever they seem most passionate about, that’s what we do. Right now a few of my teachers are using Flexcat sound systems in class, which feature groups of small, portable speakers that teachers can use to communicate with students, to promote project-based learning that isn’t tethered to the walls of the classroom. Students love being able to sit outside or in the hallway and work. And even though we rarely plan too far ahead with our makerspace, we’re planning to add some Flexcats to let groups branch out during library and makerspace time.

To say parents love the makerspace is an understatement. They still donate supplies, and when we invite prospective parents in for tours, the makerspace is a huge draw. Sometimes it makes me think back to when I first got here and the district considered closing our doors. I’m so grateful that we had a chance to develop our vision as a school site. Having a makerspace on campus has been directly responsible for bringing in quite a few kids who might have otherwise gone elsewhere.

The way our school has taken to the makerspace, and really the maker movement on the whole, has been a foundation for something entirely new. Quite simply, it’s transformed our school. Our teachers and students are so inspired to think creatively and, for a school that values inclusiveness, it has brought us all together in a way that isn’t just meaningful, but exciting.

We've detected that you are using a browser that is unsupported. To optimize your experience, please download the latest version of your browser of choice. If you elect to continue using the site, some functions or features may not be enabled or completed.